Bitcoin Mining Hashrate Continues Recovery, Now Only 16% Away From ATH


Data shows Bitcoin hashrate has continued its recovery, and is now only 16% away from reaching the all-time high (ATH).

As per the latest weekly report from Arcane Research, the BTC mining hashrate has continued its trend of recovery and is now only 16% from the ATH.

The “hashrate” is a Bitcoin indicator that shows the total amount of computing power present on the BTC network.

If a crypto has a high hashrate, it means there is high computing power in the network and a large number of nodes.

More nodes handling transactions on the network leads to more decentralization, and so the network becomes more secure. Low hashrate can therefore not only lead to worse performance of the network, but also worse security.

Now, here is a chart that shows how the Bitcoin hashrate has changed over the past year:

As the above graph shows, the Bitcoin mining hashrate this week has continued its uptrend that started in July of this year.

Currently, the indicator’s value is only 16% away from reaching the ATH that was achieved back in May of this year.

A significant feature in the above chart is the crash during the month of June. This plunge in the hashrate happened due to the Bitcoin mining crackdowns in China that forced miners to shutdown their operations. A sizeable portion of the world hashrate was located in the country.

Since increasing hashrate leads to an increase in mining difficulty as there is more competition among miners, this steady rise in the indicator’s value has now lead to an eighth straight upward adjustment in the difficulty. This is a three-year record for consecutive such increases in the mining difficulty.

Below is a table that shows some additional data related to Bitcoin miners. 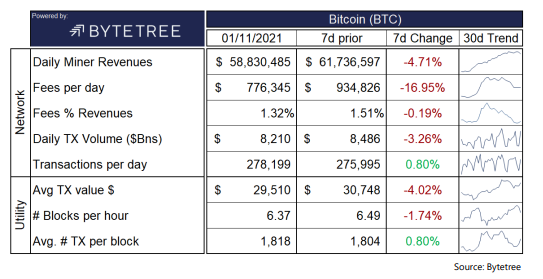 Over the last week, daily miner revenue has decreased by 5% and its value is now around $59 million. During this period, fees per day has seen a sharp decrease to 17%.

Related Reading | How The U.S. Took The Leading Position In Bitcoin Mining From China

However, despite the dip, the current miner revenue is still 31% higher than the average for the year. Also, the current trend in rising BTC prices can help make up for losses due to other factors. Here is a chart that shows the trend in Bitcoin’s price: 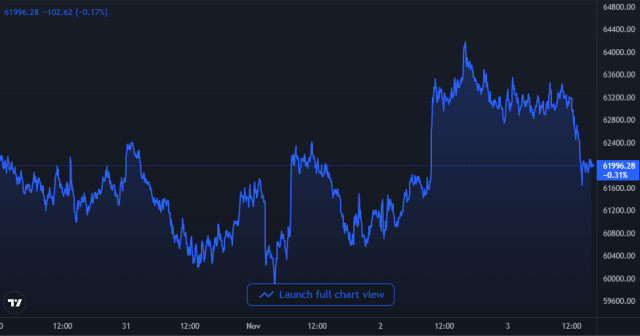 Jack Dorsey, the founder of Twitter, announced that he will be stepping down as the CEO of the company,...

Bitcoin Believer Jack Dorsey Steps Down As Twitter CEO, But For What? – Bitcoinist.com

Reports have surfaced that Twitter CEO Jack Dorsey will be stepping down from his executive role with the company....

This Friday, Edward Snowden will be appearing at BlockDown: DeData, a virtual conference fully dedicated to the challenges and...

In its latest Digital Asset Management Review, CryptoCompare has reported that in November, alternative crypto-asset investment products, such as...

Bitcoin Back on the Defensive as Moderna CEO Warns of Reduced Vaccine Efficacy, Exchange Inflows Eyed